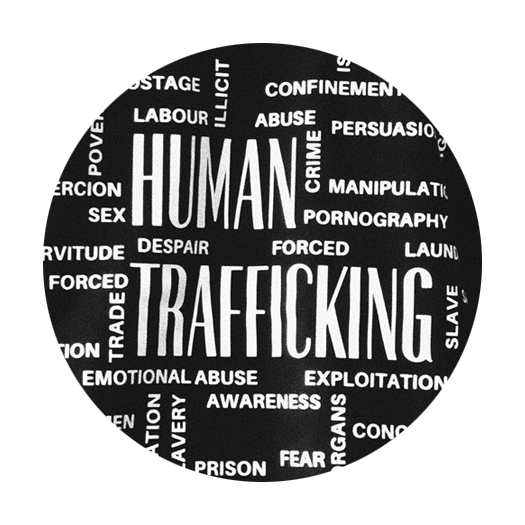 What Is Human Trafficking?

Taken from the Polaris Project: polarisproject.org

Human trafficking is a form of modern-day slavery in which traffickers use force, fraud, or coercion to control victims for the purpose of engaging in commercial sex acts or labor services against their will. Traffickers use violence, threats, blackmail, false promises, deception, manipulation, and debt bondage to trap vulnerable individuals in horrific situations. According to the federal Trafficking Victims Protection Act (TVPA), severe forms of human trafficking are legally defined as:

Sex trafficking has been found in a wide variety of venues within the sex industry, including residential brothels, escort services, fake massage businesses, strip clubs, and street prostitution.

Labor trafficking is the recruitment, harboring, transportation, provision, or obtaining of a person for labor or services, through the use of force, fraud, or coercion for the purposes of  subjection to involuntary servitude, peonage, debt bondage, or slavery.

Every year, human traffickers generate billions of dollars in profits by victimizing millions of people in the United States and around the world. Traffickers are estimated to exploit as many as 37 million victims, with an estimated 1.5 million victims in North America alone. Despite growing awareness about this crime, human trafficking continues to go underreported due to its covert nature, misconceptions about its definition, and a lack of awareness about its indicators.

Labor trafficking and sex trafficking of U.S. citizens and foreign nationals persist and thrive for a number of reasons, including:

Left unchecked, human trafficking will continue to flourish in environments where traffickers can reap substantial monetary gains with a relatively low risk of getting caught or lost profits.

Traffickers exploit others for the profit gained from forced labor and commercial sex. They lure and ensnare people into forced labor and sex trafficking by manipulating and exploiting their vulnerabilities. Human traffickers prey on people who are hoping for a better life, lack employment opportunities, have an unstable home life, or have a history of sexual or physical abuse. Traffickers promise a high-paying job, a loving relationship, or new and exciting opportunities and then use physical and psychological violence to control victims. Traffickers can be lone individuals or part of extensive criminal networks, with the common thread of exploiting people for profit.

A wide range of criminals, including individual pimps, family operations, small businesses, loose-knit decentralized criminal networks, and international organized criminal operations, can be human traffickers. Often the traffickers and their victims share the same national, ethnic, or cultural background, allowing the trafficker to better understand and exploit the vulnerabilities of their victims. Traffickers can be foreign nationals and U.S. citizens, males and females, family members, intimate partners, acquaintances, and strangers. Based on human trafficking cases that have been identified by the National Human Trafficking Resource Center, examples of traffickers may include:

Human trafficking victims have been identified in cities, suburbs, and rural areas in all 50 states, and in Washington, D.C. They are made to work or provide commercial sex against their will in legal and legitimate business settings as well as underground markets. Some victims are hidden behind locked doors in brothels and factories. In other cases, victims are in plain view and may interact with community members, but the widespread lack of awareness and understanding of trafficking leads to low levels of victim identification by the people who most often encounter them.

There is no single profile for trafficking victims; trafficking occurs to adults and minors in rural, suburban, or urban communities across the country. Victims of human trafficking have diverse socio-economic backgrounds, varied levels of education, and may be documented or undocumented. Traffickers target victims using tailored methods of recruitment and control they find to be effective in compelling individuals into forced labor or commercial sex.

Runaway and homeless youth are vulnerable to trafficking. A study in Chicago found that 56 percent of prostituted women were initially runaway youth and similar numbers have been identified for male populations. Runaway and homeless youth who lack a strong supportive network and run away to unfamiliar environments are particularly at risk of trafficking. Runaway youth are often approached by traffickers at transportation hubs, shelters or other public spaces. These traffickers pretend to be a boyfriend or significant other, using feigned affection and manipulation to elicit commercial sex or services from the victim.

Foreign nationals who are trafficked within the United States face unique challenges that may leave them more susceptible to trafficking and exploitation. In 2013, 32 percent of calls with high indicators of human trafficking to the NHTRC referenced foreign nationals. Recruiters located in home countries frequently require such large recruitment and travel fees that victims become highly indebted to the recruiters and traffickers. These fees are inflated far beyond cost in order to create economic instability and dependency on the new employer or trafficker. Traffickers leverage the non-portability of many work visas as well as the lack of familiarity with surroundings, laws and rights, language fluency, and cultural understanding in order to control and manipulate victims.

Individuals who have experienced violence and trauma in the past are more vulnerable to future exploitation, as the psychological effect of trauma is often long-lasting and challenging to overcome. Victims of domestic violence, sexual assault, war and conflict or social discrimination may be targeted by traffickers, who recognize the vulnerabilities left by these prior abuses. Violence and abuse may be normalized or beliefs of shame or unworthiness lead to future susceptibility to human trafficking.

The needs of victims of trafficking are among the most complex of crime victims, often requiring a multidisciplinary approach to address severe trauma and medical needs, immigration and other legal issues, safety concerns, shelter and other basic daily needs, and financial hardship.